Science confirms the Bible (Colossians 2:3). These insights place the Bible far above every manmade theory and all other so-called inspired books. In contrast, the Qur'an states that the sun sets in a muddy pond (Quran 18:86) and that the earth is flat. The Hadith contains many myths. The Book of Mormon declares that Native Americans descended from Jews – which has been disproven by DNA research. The Eastern writings also contradict true science.
C-14 proves the Earth is YOUNG not old!!
Fossils are petrified ORGANIC MATERIAL encased sedimentary soil subjected to extreme pressure that squashed it into sedimentary rock. Petrification does not change the organic remains but merely stiffens them due to filling of pores by the water deposited minerals. The only proper dating method for ORGANIC MATERIAL is C-14, not radiometric dating which is for rocks only.
The maximum theoretical detection limit for C-14 is about 100,000 years but the realistic detectable limit is 40-50,000 years. This means if any item that has any detectable amount of C-14, automatically has to be younger than 40-50,000 years. Any older and there is no detectable C-14. More recently evolutionist claim that C-14 is only accurate for ages of LESS THAN 20,000 years.
​

Which number is consistent with C-14 saying life is YOUNGER than 20,000 yrs old?﻿

THE WOOD HAS NOT ACTUALLY BECOME STONE as is usually understood by the layman. THE ORGANIC WOOD IS NOT CHANGED INTO STONE, but only the shape and structural elements of the wood are preserved.   -Dave's Down to Earth Rock Shop
"Beyond 40-50,000 years, there usually is not enough left to measure with conventional laboratory methods."-1998-2012 by Dennis O'Neil
Radiocarbon dating doesn't work well on objects much older than twenty thousand years, because such objects have so little C-14 left that their beta radiation is swamped out by the background radiation of cosmic rays and potassium-40 (K-40) decay. --1982, Christopher Gregory Weber
The universe has a Beginning
Albert Einstein in the early 1900s and continuing today, science has confirmed the biblical view that the universe had a beginning. When the Bible was written most people believed the universe was eternal. Science has proven them wrong, but the Bible correct. 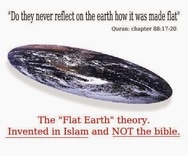 Job 26:10 He drew a circular horizon on the face of the waters, at the boundary of light and darkness.

Hebrew word used for circle is חוּג chuwg which means circle(2D) or sphere(3D).
Horizon - the line at which THE EARTH'S SURFACE and the sky appear to meet.

​This simply means EARTH'S SURFACE is circular, and from observation circular in all directions (sphere).
The vacuum of Space
Even further back than 3600yrs ago the Bible even claims earth hangs in space, while every religion in the world either dodged the question or assumed it was carried on the backs of elephants or a Titan or even poles.

Ant's Gender Known
Proverbs was written by Solomon around 970 BC. Long before biology could catch up and analyze the lowly ant, God had already known the gender of all the worker ants were female and the queen was not a leader but rather the sole reproductive unit in the colony. Biology would finally figure it out almost 3000 yrs later, that all ants are born female except for the winged drones which result from the fertilized egg that the ant queen would purposely fertilizes at will.
Human body is made of earth
Scientists have discovered that the human body is comprised of some 28 base and trace elements – all of which are found in the earth. Of course if we had looked in the Bible you would have known this from the 2nd chapter of Genesis written about 3500 years ago.
Conclusion
The Bible as a scientific book was light years beyond  the understanding of men at the time and continues to prove its reliablity as science begins to catch up and verify information God authored within its pages so very, very long ago. This alone  can prove that the Bible has a divine source and that everything within its pages can be trusted, including the state of man before a holy God.

The Bible says that man's heart is desperately wicked and sinful, making him completely unfit for Heaven even on a scale that was initially balanced. Furthermore the Bible said we were sinners from conception. This means we started off life with a mountaneous sin debt. God has said in the Bible that any sin is sufficient for us to be cast in the Lake of fire for all eternity. Yet the good news of the Bible is that God had pity upon us and sent His own son Christ Jesus to die on our behalf. Thereby paying off our sin debt in its entirety. This gift of grace allows God as judge to legally dismiss our case as already paid by our savior and allow us into Heaven, not based on our terrible efforts but rather on Jesus all sufficient and perfect effort.

The Bible says in order for any of us to accept this gift of grace we simply need to repent our sins and believe (trust) upon Jesus as our Savior. If you would like to do this you can start by praying this prayer and believing in Jesus.
Powered by