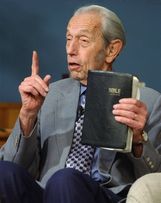 On December 15th 2013, Harold Camping died at the age 92 as a result of complications from a fall at home two weeks earlier. He will be the most infamous for his two predictions of Jesus Christ return. One was September 6, 1994 and the most recent one being May 21,2011. Both were results of complex numbers pulled from a whole host of Bible verses. He was well known for his monotone voice and worn out King James Bible, he is seen holding up in this photo. He was also known for his extraordinary memory of Bible verses and much later for his extreme Calvinistic views on salvation. But many regard him as a very knowledgeable Bible teacher.

Unfortunately he is a perfect example of how a Bible teacher can sound completely Biblical and God fearing but actually be promoting a teaching completely contrary to the Bible. Out of the 7 points for being a false prophet and teacher, Harold Camping has met at least 2 of them if not the last 3.

5) They speaking of things God has proclaimed not to be known by anyone.
Jesus in His Olivet Discourse, clearly states that no one is to know the day nor hour of His return, referring to His 2nd coming. However equal language is also used by the Bible when referring to Jesus' coming for His rapture of the Church.
It is amazing how many people, to date, try to predict the 2nd coming of Christ and every single one has been met with failure. Harold Camping made his two predictions based on complex mathematical formulas and numbers he found in the Bible. Simply put the Bible is clear no man knew the day nor the hour but that didn't phase Harold. He claimed that Daniel's predicted that those of the end time would know things that had before remained unknown. And when callers questioned his ability to set a date for Jesus return, they were promptly cut off or ignored by Harold's famous bass monotone voice.

6) They add to, alter, twist, take out of context, or even to replace the Bible.
Harold Camping grabbed numbers from various verses all over the Bible, many of which were completely unrelated to one another.  But even disregarding that he took any verse he was talking about and used them to ascertain that God was finished dealing using the Church and local congregation due to the fact that they were not being faithful to the word of God. This impassioned his plea for people to come out of the Church and listen only to Family Radio. Ironically that would make his following congregation and according to him we are supposed to avoid congregating. His sole backing for this Matthew 24:16-21.
However like most false prophets and teachers even today, Harold conviently disregarded the verse just before it and what it alludes to in Daniel.
This shows the context of whom Jesus was addressing this to. Daniel's prophecy was to the Jews ONLY not the Church, show by the beginning of Gabriel's response to Daniel.
Wrong idea of "the elect"
His call to salvation likewise was not Biblical, as the Bible says to 'believe in the Lord Jesus' to be saved. Instead he proposed that the person continually beg God that perhaps the person might be one of "the elect" and to have mercy. This teaching is consistent with Calvinism which Harold had once been part of. Little do Calvinist know that God's "elect" is stated in the Bible as Israel.
The Bible is clear that once you believe in the Lord Jesus you will be changed by God from the inside out and can know you are saved. If you wish to really be saved, instead of Harold's unsure and unBiblical method, you can start by praying this prayer and inviting Jesus into your life.
Powered by