Survival of the Fittest values IMMORALITY
Atheism has always insisted that humans are animals, evolved animals. This is due to the insistence that man didn't need an all powerful, omnipotent being in his development. Without and omnipotent being like the God giving us clear moral guidance against murder, theft, rape, coveteousness, and envy, we are left with a nagging question on just where these universal moral laws came from. More importantly when it comes to actions that ensure survival of the fittest murder, theft, and rape are actually huge advantages. 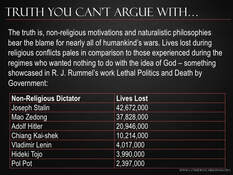 Atheist Show a Complete LACK of Morals
Let us also not forget that every atheist leader has produced massive carnage greater than the death tolls of both World Wars combined(77 million). Every socialist leader has been atheist. From Hitler of the Nazi (National-Socialist German Workers' Party) to Mao Tse Tung (Chinese Communist Party) and even to Castro of Cuba, they were all atheist and in total they killed over 100 million people.
​
Hilter even believed in evolution and justified his butchery, as the more evolved Aryan race ridding the world of the less desirable races and traits. This is the morality evolution produces.

Even Atheist Acknowledge Christianity's morals
If morality had to evolve on its own without a higher power telling us what is right and wrong to do, MORALITY WOULD NEVER EVOLVE. Living with moral values of not stealing, not murdering, not lying, not raping is actually a disadvantage when it comes to securing the means of survival. And the idea of cooperation evolutionist think would have happened for survival is only a pipe dream. Simply put, without a God programming morals into humans there would be no other way for us to have morals.

For this reason even atheist have found that they can trust the words and honesty of Christians who are Bible centered, when they can't even trust their own fellow atheist the same way. Even Richard Dawkins found Christianity morals were preferable as it doesn't condone murder nor rape. Coming from a bitter enemy of Christianity, this is the highest form of praise.
Powered by