Humans Created from a Clot of Blood
Science FACT: Man comes from an egg and a sperm each from the two parents & bones and flesh are all formed at the SAME TIME!! 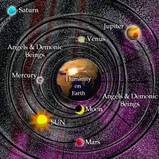 The Earth does not Rotate
The Qur'an repeats a common view of the 7th century that the earth was a fixed and un-moving object with the stars, sun, and moon revolving around it.
Current: Saudi cleric rejects that Earth revolves around the Sun (Video included)

Birds Fight Elephants
Sees thou not how Allah dealt with the companions of the ELEPHANTS? Did He not make their plan into misguidance? And he SENT AGAINST THEM FLIGHTS OF BIRDS. --Qur'an 105:1-3

Science FACTS: Birds and elephants don't fight each other. In fact, African elephants and birds have a symbiotic relationship where the birds eat bugs and lice off of elephants [6]
Conclusion
If nothing else these few incorrect prophecies, which are only the tip of the iceberg, clearly shows the Qur'an to be seriously flawed and Allah, who  claims to be all knowing, to not even possess a rudimentary understanding of simple, basic science or history. This is strange, since according to Muhammad, Allah was the one who made the earth, in the first place. All these verses show the Quran and its writer, Muhammad to only possess a 7th century Arabic understanding of the world. For this alone, Muslims who hold tenaciously these outdated views should be pitied, above all else, for having been so grossly lied to.

The Bible on the other hand clearly tells us Earth is a circle and the Hebrew word used actually even means SPHERE and this over 3600 yrs ago compared to the quran's only 1400yrs ago and getting it completely wrong:
Even further back than 3600yrs ago the Bible even claims earth hangs in space, while every religion in the world either dodged the question or assumed it was carried on the backs of elephants or a Titan.
The Bible is vindicated by modern scientific facts which prove the earth is not only round but hangs in empty space. And most astounding the Bible was the only one to do so 3600 years ago. Now if the Bible can be this precise and accurate with things that are only understood in this century, should the Bible not be trusted when it talks about the eternal destiny of man?

The Bible says in Romans 3:23 For all have sinned, and come short of the glory ofGod;. This means no matter how good we keep ourselves and how much good things we do we can't measure up to God's perfect standard. But the awesome message of this accurate Bible is found in Romans 5:8 But God commendeth his love toward us, in that, while we were yet sinners, Christ(Jesus) died for us. and most importantly:
Won't you listen to the Bible & believe today upon the Jesus of the Bible who loved you so much to die in your place so you could go to Heaven? Pray this prayer and start believing in Jesus of the Bible today.
Ref: http://wikiislam.net/wiki/Scientific_Errors_in_the_Quran
http://www.discovercreation.org/documents/TheBible-MythorTruth.htm
http://vikingship.org/ourfaqs/beliefs_1.html
Powered by