​Many textbooks have drawings puportedly showing that fish, salamander, turtle, chicken, and rabbit embryos look extremely similar to human embryos. These are based on 1874 drawings done by Ernst Haeckel, Darwin's advocate in Germany, whose evolutionary thoughts were instrumental in the rise of Nazism and its belief in the master race and inferior races. These "similarities" are used to prove that evolution is true.

However, in 1997, Dr. Michael Richardson showed ACTUAL PHOTOGRAPHS of the various embryos looked extremely different from Haeckel's drawings. His conclusion? 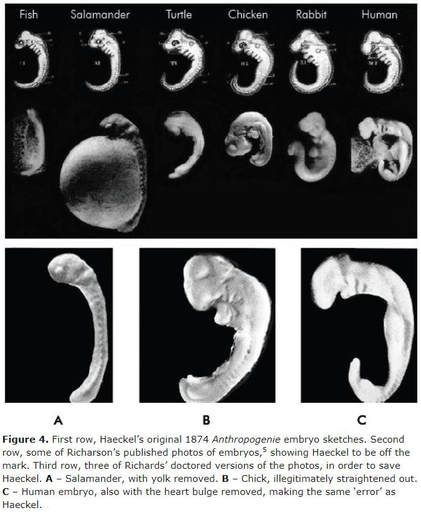 "Haeckel's drawings of 1874 are substantially fabricated. In support of this view, I note that his oldest "fish" image is made up of bits and pieces from different animals-some of them mythical. It is not unreasonable to characterize this as 'faking.' ...Sadly, it is the discredited 1874 drawings that are used in so many British and American biology textbooks today." --(M.K. Richardson, "Haeckel's Embryos, Continued," letter to Science, 281 (5381):12889, August 28, 1998)

For decades people have based their belief in evolution on these FAKE DRAWINGS.​
References and Quotes:
Darwin Lobbyists Defend Using Fraudulent Embryo Drawings in the Classroom   --Casey Luskin, EvolutionNews.org, 2012
Haeckel’s Fraudulent Embryo Drawings Are Still Present in Biology Textbooks — Here’s a List   --Casey Luskin, EvolutionNews.org, 2015
"...his fundamental point – that there are important similarities between different vertebrate embryos – seems less mistaken, even though HIS DIAGRAMS ARE PROFOUNDLY WRONG."   --Matthew Cobb, How fudged embryo illustrations led to drawn-out lies, NewScientist.com
"Using modern techniques, a British researcher has photographed embryos like those pictured in the famous, century-old drawings by Ernst Haeckel--proving that Haeckel's images were falsified. Haeckel once admitted to his peers that he doctored the drawings, but that confession was forgotten."   --Haeckel's Embryos: Fraud Rediscovered, SCIENCE magazine
​One of the most popular and familiar pieces of evidence used to bolster the theory of evolution – reproduced for decades in most high school and college biology textbooks – is fraudulent, and has been known to be fraudulent for nearly 100 years. --Evolution frauds
The Man, the FRAUD
Either Haeckel is a horrible artist or he's a fraud.  History has found Haeckel was a FRAUD. At Jena, the university where he taught, Haeckel was charged with fraud by five professors and convicted by a university court. His deceit was exposed in “Haeckel’s Frauds and Forgeries” a 1915 book by J. Assmuth and Ernest R. Hull, who quoted 19 leading authorities of the day.

"What he [Haeckel] did was to take a human embryo and copy it, pretending that the salamander and the pig and all the others looked the same at the same stage of development. They don’t. … These are fakes.” --1997 'Times of London' interview, Dr. Michael Richardson, embryologist at St. George’s Medical School in London
Ref: ​EVOLUTION FRAUD IN CURRENT BIOLOGY TEXTBOOKS | Haeckel's Frauds and Forgeries, 1915 book | Haeckel's frauds and forgeries / by J. Assmuth and Ernest R. Hull. | ​Pictures of Evolution and Charges of Fraud 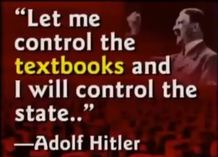 Conclusion:
​There seems to be a systematic attempt to commit fraud in order to have evolution be accepted. However with what we know about the true pictures of fetuses shows no relationship between any living beings. If evolutionist are about science, then they should be up in arms about these FRAUDULENT drawings, which were made solely to convince people that evolution was true due to the similarities of fetal development between fish and humans. Yet evolutionist seem completely ok with this fraud until called out on them.

The question every person ask themselves knowing the truth is are you ok with this FAKE PROOF of evolution? Keep in mind this one of their strongest proof for evolution. So why would someone, anyone, continue to print and insist teaching these outright LIES. Adolf Hitler probably  worded it the best as the state and the people can be controlled by the lies of the textbook. So will you continue with the lie of evolution or look to the Bible who got it right from the very start saying that man was created by an all powerful, all knowing God and that you are not just a random clump of cells.
Who are you?
Evolution wants you to think you are clump of cells that came about by random chance/accident. The Bible says you are NOT an accident but rather a purposeful creation of a God who loves you and wants you to live with Him forever. But first in order for you to live with Him, you must be made right with Him and free of all your sinful nature, that always wants to rebel against His order and rules. To be made right with God, you must acknowledge that you are a sinner because of sinful nature and that you need the Saviour, who is none other than Christ Jesus. Lastly and most important is you must accept by placing your faith/trust upon that Saviour Jesus alone. Your works are not good enough to play any part on this. It is the gift of God. This act alone places our sins upon Jesus as our substitute and makes righteous before God. If you wish to accept this free gift from God, pray this prayer and BELIEVE UPON JESUS and be saved.
Powered by