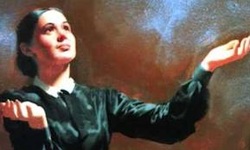 One of the most indistinguishable sects that most Christians have trouble recognizing these days, and I speak from first hand experience, is the Seventh Day sect. Started by William Miller in 1840 when he read Daniel and calculated the date of Jesus return to rapture the believers in October 22, 1844 . At the time, Ellen G White joined the cause and declared that she received visions confirming both of Miller's dates.(a)

The Millerrite movement suffered what was dubbed the Great Disappointment when both dates in 1845 did not materialize with the return of Jesus. Many had sold all their belongings to wait for Jesus. Even William Miller had to admit he was wrong in his prediction and repented misleadings.(b) However a small group of the Millerrites, which included Ellen G White, refused to admit that they had been led astray. Instead they gravitated around Ellen G White, who had declared herself a prophetess, due to her visions, which conveniently excused the 1844 date by saying rather than returning, Jesus simply had entered the Heavenly Holy of Holies and had begun an "Investigative Judgment".

Ellen G White has written hundreds of documents concerning her visions. Most suspiciously are not about the future like most prophets in the Bible but rather about old Bible stories and appear like additions to the accounts. Sadly most have been found to be word for word plagiarisms from books existing at her time.(c)

Today there are the Seventh Day Adventist(SDA) based from California but several offshoots have separated from them claiming to be different or that the SDA church is apostasy or some even claiming Ellen G White to be false. However they all still cling onto Ellen G White's teachings concerning keeping the Sabbath for salvation, Investigative Judgment, the confusing dietary restrictions which is a strict vegan diet (no milks, eggs, or cheese allowed) but allows for pork, and others. These are the Seventh Day Remnant(SDR)(most vocal these days), World's Last Chance(WLC), Berean Church of Free SDA, and the list grows by the day. A simple way to recognize any of them is if they demand Sabbath observance as the Mark of God, otherwise you aren't saved.

a) The Great Disappointment     b) Repercussions
c) The Great Controversy:White copied both words and pictures, Proof that Whites "I was shown" visions were even copied!, Proof White copied the pillars of SDA theology She didn't get it From God!
2) Do they teach that Jesus is God and that he died and rose again?
While the Seventh Day Adventist(SDA) and the Seventh Day Remnant(SDR) do teach Jesus died and rose again, a dirty little secret they have is that the Jesus they believe in is really Michael the Archangel. While this might appear to be a minor issue, it actually is a big issue because that makes Jesus not divine and therefore his death is not sufficient to fully save anyone. Jesus always claimed to be God in all the gospels yet they based this one doctrine solely on one verse Jude 1:9 and Ellen G White's opinion that no one but Jesus could face off against the devil.
However they disregard these verses stating that Jesus is not an angel
4) Do they do it for monetary gain or any personal gain?
Another secret of the White's estate in California, is that while Ellen G White was telling everyone to not eat meat, she was having chickens prepared for her meals. Also demanding 10% tithing and buying her many books at high prices for the time period made her extraordinarily rich. Only false prophets ever sell their prophecies for money.
5) Are they speaking of things God has proclaimed not to be known by anyone?
6) They add to, alter, twist, take out of context, or even to replace the Bible.
The SDA have gone as far to quote Ellen G Whites writings over the Bible and have now come out with a new Bible(Clear Word Version) which rewrites myriads of verses that did not back up their Sabbath claims. By far the biggest defining point of SDA and SDR is their observance of the Jewish seventh day Sabbath(Shabat), which is still insisted upon by practicing Jews in Israel today. Ellen G White insisted that Sabbath observance was necessary to stay saved.
This was what Ellen G White dreamed up of when reading Rev 13:16-18, the Mark of the Beast
Unfortunately she missed these following verses that state plainly who the Seal of God really is. No true prophet would have made this mistake.
To understand the how Sabbath was a shadow of Christian's rest from striving in the completed work of Christ, one must understand that belief in Christ atoning death on the cross is completely sufficient to cover ALL our sins(past, present, and future). That is our TRUE sabbath rest.
Adventist boast 18 million members worldwide in 2013. It is certainly a sad thing when one person can lead so many astray, by claiming to have visions from God. Ellen G White is definitely a false prophet for she meets 5 out of the 7 indicators. However people are leaving as they start seeing the truth. Here is a List of 100 SDA Pastors fired for rejecting White as prophet!

If you are one of them I want you to learn, as I have, that belief in Jesus is all you need. No amount of good works is good enough to keep you saved, despite what Ellen G White and the churches claim. The Bible is very clear about that. Jesus is about ceasing to our own striving to get to Heaven and getting to Heaven based solely on what Jesus has done alone. That is the good news, no more endless working to get to Heaven. Simply rest in Jesus and He will get you there. You can start by believing in not an angel, but the divine Jesus of the Bible.
Powered by