​Evolution by definition is GRADUAL CHANGES of organisms from simple to complex over LENGTHY AGES.
The Fossil Proof Shows NO CHANGE over millions of years

100 million year old ants, trapped in amber are completely IDENTICAL to ants you find on the pavement today. If evolution is gradual change over time, how come ants suddenly decided to stop evolving? Surely packing in larger size would have been advantageous. In fact scientist indicate that these ants prove that they were just as social back then as they are today. This proves ants remained UNCHANGED for millions of years. Obviously no evolution took place.

Jellyfish (soft tissue)
The fossil of jellyfish are  IDENTICAL in every way to modern jellyfish down to the tentacles. There is no sign of any evolution whatsoever.  Again evolution (gradual change) is nowhere to be seen in the fossil record.

This denies evolution its millions and billions of years for gradual change, which is proven to have NEVER OCCURRED according to the fossils. 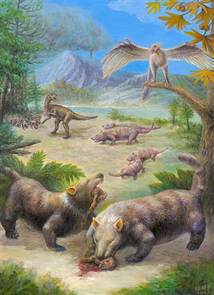 ​However recent fossil finds have put even this theory of evolution to shame. Large Mammals not only existed at the same time as dinosaurs but even have DINED on dinosaurs BEFORE they went extinct. This was found in  China. If evolution didn't get this timeline right, what else did they get wrong?

Shouldn't we believe the Bible that says dinosaurs were created at the same time mammals, like humans were? After all the scientific evidence proves it.
Ref: BBC: Fierce mammal ate dinos for lunch | Dinosaur Found in Mammal's Belly | Large mammals once dined on dinosaurs | Large Mesozoic mammals fed on young dinosaurs​
​
"it was ONLY AFTER THE DINOSAURS WENT KAPUT THAT MAMMALS WERE ABLE TO EVOLVE BEYOND THEIR TINY, MOUSELIKE FORMS into the widely specialized species that populate the world today."  -- By Bob Strauss,Dinosaurs Expert, The Mammals
"New fossil finds from China are painting a different picture of the mammals that lived alongside the dinosaurs during the Mesozoic era" -- Scientific American, Jan 13,2005
"Mesozoic mammals were thought to have lived in the shadow of the dinosaurs. But the picture is quite different now "  --Meng Jin, American Museum of Natural History
Conclusion - NO gradual change in animals nor plants
The scientific evidence has spoken and is not only conclusive but overwhelmingly against evolution in every way. Evolution is the belief that gradual change happened over millions and billions of years. Yet the fossil record shows NO CHANGES in neither plants nor animals over hundreds of millions of years. Even the father of evolution admitted this. We also see animals that supposedly were not to be of the same era, together with the very animals they were supposed to not be around with. Even the strata supposedly millions of years in the making and millions of years old turn out to have been created in days, lest the soft-tissue would have decayed away leaving only skeletons.

This all proves that evolution, an invention of man to explain away a SUPERnatural God SUPERnaturally creating the universe and all creatures abruptly, is nothing more than a fantasy with absolutely NO PROOF whatsoever. Far from the scientific fact evolutionist claim it is, evolution is even denounced by its own best proponents as being completely without its most critical evidence.

This plainly leaves evolution in the realm of blind faith, with NO PURPOSE, NO DRIVING FORCE, and NO SOURCE for its matter & energy, order, and life, all of which are required to be explained. Would you rather believe this UN-Biblical and UN-Scientific nonsense, that even Darwin admitted had no proof for on his deathbed, or the completely Scientific and Biblical evidence that there is a SUPERnatural God out there who created the universe and all its creatures SUPERnaturally, even you. The Bible says this God loves you and even took it upon himself to make you right with Him, if you but TRUST Him. Won't you do that today? Seek Him and He says you will find Him. Ask and He will save you.
Powered by