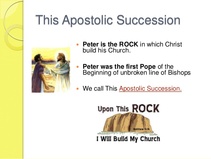 One of the biggest pride and joys of the Roman Catholic Church that they mention is an unbroken line of popes from their founder the apostle Peter, who they claim was their first pope. The requirements to be a pope is that:

Even priests are to be married in the OT. Where did they get this unBiblical idea that priest should be celibate?
Apostle Peter (1st Catholic pope) SPEAKS
If Catholics believe no one else, they should believe the apostle Peter, whom they call their founder and 1st pope. According to Catholic traditions the popes declared infallible in 1870, at the First Vatican Council. Unlike the popes and priest of the Church Peter was actually married, since he actually had a mother in-law.
If nothing else Peter told everyone how to be saved. Again good Catholics must believe Peter within Scripture if nothing else, as its both Church tradition and Scripture.
The Peter of the Bible askes all who are within his hearing to accept Jesus Christ of Nazareth, who alone can save us. Won't you obey the call and believe in the Jesus of the Bible, who only has died on the cross to redeem you. He only requires you believe in Him alone and not trust on any of church traditions to save you. Won't you do that today?