There is primarily 2 reasons given that the Book of Mormon was given to Joseph Smith, as a new revelation by the Angel Moroni. We will investigate these 2 reasons. For if they prove false, then the Book of Mormon by its own admission will prove pointless, as it is attempting to replace something that was not flawed in the first place.

Reason #1
According to Joseph Smith, the Jesus' gospel was corrupted after the 12 disciples where "many plain and precious things were taken" from the Bible, soon after Jesus' ascension. This was also predicted in the Book of Mormon in 1Nephi 13:26-29, about 600 BC that "plain and precious things" would be removed from the Bible
Therefore Nephi supposedly prophesied, in 600 BC, the need for the Book of Mormon to be "restoration" of the Bible.

99.994% Accuracy Rate to KJV
FACTS:
​The Dead Sea Scrolls were found in the Wadi Qumran, 1946 and 1956 by Bedouin shepherds and a team of archeologists. They date to 3rd century BC and is confirmed by bronze coins and radiocarbon dating. This is 300 BC - 201 BC. Well before Jesus' followers could corrupt the Bible.
Among the Scroll fragments was found a COMPLETE scroll of the WHOLE BOOK of Isaiah. When this was compared to the Isaiah of the KJV, it was a 99.994% match. It  is now housed in Jerusalem at the Shrine of the Book at the Israel Museum.

CONCLUSION:
Therefore there is NO CORRUPTION of the original Hebrew text at all. The text is UNCHANGED, even with the Bible we have today, from the text in Hebrew 2300 yrs ago.
Reason #2
According Alma 7:10 Jesus is predicted written in the Book of Mormon 600 BC, to be "he shall be born of Mary, at Jerusalem which is the land of our forefathers,"
Even the church of Latter Day Saints (LDS) acknowledge this WRONG PREDICTION, but tries to excuse it by saying Bethlehem is close enough to Jerusalem 5.52 miles (97 football fields) away and at least almost 2 DAYS journey on foot. 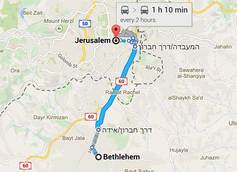 FACTS:
Bethlehem is today still some 5 miles and during Jesus' day 6 miles WALKING. Even today by bus Bethlehem is about 1 hours  away from Jerusalem.
o Jerusalem was a WALLED CITY. Anything outside the fortifications were not part of the city.
o Even Bethlehem as a city or town became walled under the rule of King Asa (2Chron14:6-7)
o ​Archaeologist even mention there were cities located between Bethlehem and Jerusalem.
o Jerusalem was NEVER referred to as a "land" but a "city" only
Bethlehem was NEVER a suburb of Jerusalem and can not be confused, but rather a completely different city all together with its own walls and gates.
o Most importantly according to the Bible Micah (prophecying from God the same time Alma), King Herod, the Scribes & Pharisees, the wise men, the shepherds, and even the large angelic host who told the shepherds ALL got BETHLEHEM right. All except Alma in the BoM.
o The KJV clearly says Jesus was born in Bethlehem. And the LDS church trusts the KJV as its the only version of the Bible they use and pass out to unbelievers.
​Matthew 2:4-6 (KJV)
4 And when he had gathered all the  chief priests and scribes  of the people together, he demanded of them where Christ should be born.
5 And they said unto him, In Bethlehem of Judaea: for thus it is written by the prophet,
6 And thou Bethlehem, in the land of Juda, art not the least among the princes of Juda: for out of thee shall come a Governor, that shall rule my people Israel.
Matthew 2:16 (KJV)
Then Herod, when he saw that he was mocked of the wise men, was exceeding wroth, and sent forth, and slew all the children that were in Bethlehem, and in all the coasts thereof, from two years old and under, according to the time which he had diligently inquired of the wise men.
Luke 2:15 (KJV)
And it came to pass, as the angels were gone away from them into heaven, the shepherds said one to another, Let us now go even unto Bethlehem, and see this thing which is come to pass, which the Lord hath made known unto us.
Micah 5:2 (KJV)
2 But thou, Bethlehem Ephratah, though thou be little among the thousands of Judah, yet out of thee shall he come forth unto me that is to be ruler in Israel; whose goings forth have been from of old, from everlasting.

CONCLUSION:
There is no good reason for confusing Bethlehem and Jerusalem. Matthew never mixed up land and city in fact no Bible writer every mixed up Bethlehem and Jerusalem. Before the invention of cars Bethlehem can and would NEVER be confused with Jerusalem, as they were always separate cities. Being separated by about 2 days journey of about 3 walking miles per day and 2 city walls does not allow for Bethlehem to be a suburb of Jerusalem. Whats more is there were even 2 Bethlehems and the Bible prophets were VERY SPECIFIC.
Ref: The Birthplace of Jesus: Bethlehem or Jerusalem? | Bethlehem history | Bethlehem: City of David and Birthplace of Jesus | Two Bethlehems |Six Miles From Jesus
Bible's Test for TRUE Prophets
Mormons hold the Book of Mormon as inspired by God as the Bible, given by the angel Moroni. Yet its prophets makes mistakes in their prophecies getting the most elementary of information wrong that are proven by historic records and archaeology and even the Bible. God says in Deuteronomy 18:20-22, the TEST of a true prophet of God is that they get NO PROPHECIES WRONG, as God makes no mistakes. If the prophet get even 1 wrong, the prophet is FALSE. The prophet is to be put to death and the prophecies are to be never to be feared.

So to should it be with Joseph Smith and the slew of false prophets he wrote about in the Book of Mormon have had many failed prophecies. Opposing the Book of Mormon, the Bible has been very consistent and precise prophecies proven throughout history as accurate and all its fulfilled prophecy correct down to the very letter. Knowing that the Bible is this dependable against even the Book of Mormon's track record of FALSE historical information, would you trust the Bible? Even the predictions made by Jesus was prophetically accurate down to "not one stone would be standing on another".

The Bible says God wants to save all men from their sins, making us all right with Him, by simple FAITH in what Jesus has already done on the cross for us all. Not only is this easier than the works based gospel of the FALSE Book of Mormon, it is unearnable and guaranteed acceptable to God. While this might not be as great as being your own god that the FALSE Book of Mormon claims which the Bible says is IMPOSSIBLE (Isaiah43:10), you get to be with God for all eternity instead of Hell. Won't you trust the REAL God of the Bible who made a way for you to be with HIm forever free of all efforts? Pray this prayer and start trusting this Jesus of the Bible.
Powered by