Nebraska Man (Hesperopithecus haroldcooki)
Found in 1922 by Henry Fairfield Osborn, the director of the American Museum of Natural History, this missing link was quickly placed into all textbooks. Imaginative drawings in the Illustrated London News gave the impression a complete caveman had been found, when only a tooth had been found.
Nevertheless Nebraska Man was exclusively used as proof forcing the 1925 "Monkey Trial" to force the teaching of evolution as a fact in American schools. In 1927 the rest of the skeleton was found. What the textbooks didn't tell you was:

Then all the drawings of Hesperopithecus haroldcooki and his "family" were hurriedly removed from evolutionary literature.

Piltdown Man (Eoanthropus dawsoni "Dawson's dawn-man")
Found in 1912 by Charles Dawson in a gravel pit near Piltdown, England, Piltdown Man was heralded  as man's missing link proving man's evolutionary past beyond a shadow of a doubt.
In light of these discoveries the Piltdown Man was quickly removed from display at the British Museum.

Ramapithecus
Found in 1930s in India and later Africa, Ramapithecus was described as a more advanced primate that appeared 14 million years ago. What they didn't tell you was what they used to determine what this ancestor looked like: 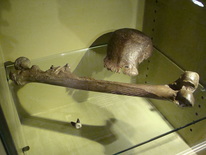 ﻿Java Man (Homo erectus)﻿
Dubois assumed that apelike bones near a human bone meant the two belonged to the same creature, constituting Darwin’s missing link. In 1895, Dubois returned to Europe and displayed his fossils. The response from experts was mixed, however. Rudolph Virchow, who is regarded as the father of modern pathology, said: “In my opinion, this creature was an animal, a giant gibbon, in fact. The thigh bone has not the slightest connection with the skull.”

In 1907, an expedition of German scientists traveled to Java seeking more clues to man’s ancestry in the region of Dubois’ discovery. However, no evidence for Pithecanthropus was found. The expedition’s report also noted a nearby volcano that caused periodic flooding in the area. Java Man had been found in volcanic sediments. The report observed that the chemical nature of those sediments, not ancient age, probably caused the fossilization of Pithecanthropus.

Despite, the expedition’s findings and various deficiencies of Dubois’ work were largely ignored, and Java Man became one of evolution’s undisputed “facts.”
Ref: Monkey brains (cuisine),

Peking Man (Homo erectus pekinensis)
Then there was Peking Man, worked on and validated by a number of Piltdown alumni. In seeing textbook portrayals of Peking Man, few students learned that the skulls had been found in scattered little fragments, and that the reconstructions were actually composites taken from various individuals.

Where fragments were missing, plaster was substituted, and the famous final images of Peking Man were the creations of a sculptress named Lucille Swann. Later, all of the Peking Man fossils mysteriously vanished, except for a couple of teeth, preventing Peking Man from being subjected to the kind of checking that doomed Piltdown Man.
Who will YOU trust?
It should be clear by these hoaxes presented as proof of evolution, that scientist are willing to go to extraordinary efforts to deceive us into accepting evolution as a fact, when it clearly is not. Are these hoaxes more convincing than the Bible? The Bible which has been proven 100% true in Science, Medicine, History & Archaelogy, and Prophecy, says we were CREATED by a supernatural, all powerful God in an instant, with no gradual changes necessary.

Will you trust? These MANMADE HOAXES or the God of the Bible who says He created you and loves you so much that He sent His Son, Jesus, to die for your sins and make you right with God so you can go to Heaven. If you want to trust the God who created the universe and everything in it, all you have to do is accept Jesus by believing in Him and calling upon Him to save you. Won't you do it today?
Powered by