Christian View of Homosexuality
Most people think that Christians hate Homosexuals. This can't be the furthest from the truth. We respect their choice. We might not like it and know that God doesn't like it nor condones it. God created male and female and made male to cleave with female. Homosexuals however have nothing to fear from Christians as its just the same as any other sin, forgiveable by the blood of Jesus Christ. And Jesus was the first to say "he who is without sin cast the first stone." This is why Christians will not condemn or hate Homosexuals because they are sinners just like the rest of us. We would never hurt them nor throw them off of buildings nor hang them like what is done by those of the Islamic faith in muslim ruled countries like Saudi Arabia, Iran, and even in ISIS held territories. Both Shia and Sunnis do this. We Christians stand against this kind of hatred against any people. However Science and Medicine prove homosexuality is a choice and a bad choice at that. 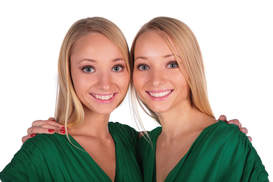 Is Homosexuality Genetic?
According to 8 scientific studies done in the USA and Australia between 1991 to 2002, the answer is a resounding NO. These studies involved large numbers of identical twins. Identical twins have the exact same genes and DNA. If homosexuality is caused by genetics or prenatal conditions and one twin is gay, the co-twin should also be gay.

Eight major studies of identical twins in Australia, the U.S., and Scandinavia during the last two decades all arrive at the same conclusion: gays were not born that way.

“Because they (identical twins) have identical DNA, it (homosexuallity) ought to be 100%,” Dr. Whitehead notes. But the studies reveal something else. “If an identical twin has same-sex attraction the chances the co-twin has it are only about 11% for men and 14% for women.”

In 2002 Bearman and Brueckner studied tens of thousands of adolescent students in the U.S. The same-sex attraction concordance between identical twins was only 7.7% for males and 5.3% for females—lower than the 11% and 14% in the Australian study by Bailey et al conducted in 2000.
Are Male Lions Gay?
In 2016 the media was abuzz when photographers said they saw two male lions were engaging what appeared to everyone mating activity. Everyone immediately jumped to conclusions and gay advocates point this proves that gay was normal in nature and not a conscious individual choice. However according to scientist who study the behavior it was not gay behavior at all but rather social interaction.
​
But in both cases, THESE LIONS AREN'T MATING. When male lions mate, they zealously guard a receptive female for days at a time, having sex every half-hour or so and refusing to let any other males come near the female. A male lion ejaculates almost immediately upon inserting his penis into the female, and accompanies his ejaculation with a particular yowl. The male-on-male behavior in Kenya was nothing like that, and the male on top didn't ejaculate."     --Craig Packer, director of the Lion Research Center at the University of Minnesota
​
"On rare occasions, they'll display the mounting behavior that Goldstein witnessed. It seems to be a way to smooth over social tensions. The same sort of behavior occurs in baboons and many other social mammals, Packer said.  Female lions do it too. It's a SOCIAL INTERACTION that has nothing to do with sexual pleasure," --Paul Goldstein, a British guide for Exodus Travels
"[P]robably, they have been INFUENCED BY GAYS WHO HAVE GONE TO THE NATIONAL PARKS AND BEHAVED BADLY,"--Ezekiel Mutua, Kenyan photographer
“That is why I will say isolate crazy gay animals, study their behaviour because IT IS NOT NORMAL. The very idea of sex even among animals is for procreation. Two male lions cannot procreate and therefore we will lose the lion species." --Ezekiel Mutua, Kenyan photographer

​Two male lions seen in gay sexual encounter in Kenyan national park | Gay Lions? Not Quite - Live Science |
Homosexual Lifespan
The strongest argument against homosexuality however doesn't come from the animal kingdom. Instead it comes from our own human bodies. According to a US Center of Disease Control study done in 2005, homosexuals were found conclusively to live 20 years shorter than their heterosexual counterparts. This makes same the same sex lifestyle to be a very bad idea, medically.
​
Homosexual behavior "cuts your life by about 20 years."  — Bob Marshall on Thursday, May 24th, 2012
"..., life expectancy at age 20 years for gay and bisexual men is 8 to 20 years less than for all men."  --International Journal of Epidemiology, Vol 26, Issue 3, 1 June 1997, Pg 657–661
But they are increasingly teaching that homosexuality is the same as heterosexual behaviour. It certainly isn’t. Here we have homosexual activity, which, literally, is much worse than smoking,”
​--Dr. Paul Cameron, Yet Another Study Confirms Gay Life Expectancy 20 Years Shorter
Ref:     What is the average lifespan of a gay man in North America? |
Conclusion
Scientist have concluded that homosexually is a choice by the person with upbringing being a major part of it. However there is nothing biological nor genetic to it, meaning people can change their minds. You aren't born gay. But more importantly it would seem the lifestyle choice straight up shaves 20 years off your life expectancy.

While these views completely agree with the Bible, that its a horrible act because God made male to reproduce with female, as observed constantly in all the animal kingdom, the Bible never requires the  death of the offenders with the exception of national Israel. The only reason it was required within the Old Testament nation of Israel was because they, as a nation, had agreed to live by all the laws of God which included no homosexuality within their borders.

The real story is that, even with bad choices such as homosexuality, there is an even greater and more loving God that is willing to forgive and save. No bad choice (aka sin) is too great not to be forgiven. And after being forgiven, God will help you work from the inside to overcome your natural instinct to make bad choices in rebellion against His natural order. All you have to do is recognize your sin and your need for God's savior Jesus, who can change your mind and heart from within. If you choose to freely pray this prayer and start believing upon Jesus the savior who can cure the sin nature/instinct that is within all of us and make us all right with God.
Powered by