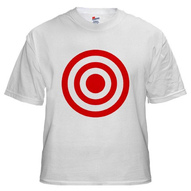 I've notice many Christians seem to love wearing a bulls eye. Especially here in the States,its as if they feel their lives are too comfortable. Perhaps its because we don't have people kicking down our doors and dragging us out to be shot for our faith, that many of us feel like we are not living a victorious life. Perhaps its our ease and convienences at our fingertips that has us worried that we are not getting the opportunity to be subjected to enough persecution to be commended by God.
So instead of thanking God for placing us in a country with religious freedom, we find many insisting that God turn up the heat upon all of us. Now especially with the nearness of an imminent Rapture, we find people instead of joyfully and hopefully looking forward to it, rather back peddling and insisting the Church go through the time of Jacob's Trouble (the Great Tribulation).
Most of this has been spearheaded by those of the Mid and Post Trib view, but has been a long held by Amillennialist  All of them hold one thing in common. That is they have an ardent belief that it is only through great suffering or martyrdom one can be worthy of Jesus calling to be a Christian. One obvious reason why this is Biblically false, is this makes Christianity works based. Another not so obvious reason is that not only are we all different people who go through different experiences, but we are not all called to do the same things. Therefore it only stands to reason we are not called to suffer in the same way as the person next to us.

Are all Christians the same?
Criminals were beheaded or thrown to vicious animals back throughout history. But today's criminals die by lethal injections. Should we be executing criminals by the same means all the time. This is the folly of a one-size-fit-all mentality. Yet this is what is being demanded by these Christians when they insist that since other Christians are being martyred for their faith, they should not be let off the hook until they are likewise martyred.
It is tradition and according to John18-19, that Peter was thought crucified upside down. Where is still in dispute. But does this mean we all should be crucified or killed? John, out of the original Apostles, was the only one to die a natural death. Why wasn't he martyred like the rest, if we are all asked to suffer? Even Peter in John 21:21-22 asked this of Jesus. What was Jesus' response, 'Yes he will die just as you are called to die.'? No instead Jesus says 'If I choose him to live to see my 2nd coming, what would that be to you?' Likewise we should ask these equal-opportunity suffering Christians the same question. 'If God chooses that we live unmartyred, untroubled, and die a natural death, what is that to you?'
Does tribulation and martyrdom make one more of a Christian?

Sometimes, one's view expose what is truly in the heart and intention of a person. Many Christians, when you strip it all the way down, will find that they have an underlying desire to be part of the persecuted/martyred crowd because they feel it makes them better or more valuable than those who do not. But in order for this to be true, we would have to be using a worldly value system. However, God's value system is completely different and doesn't involve measuring using "self righteousness".
As you see God doesn't see any of us better or worse, advantaged or disadvantaged over anyone else. We are all equals to him. Nothing gives us more of an advantage going into the Kingdom than something else. Only by having Jesus' righteousness do any of us get into Heaven. Unlike worldly standards, no one can earn righteousness by suffering or dying for our faith, otherwise you'd be working your way into Heaven. Sadly too many people treat Heaven as something earned instead something given by grace and accepted.

In a way, suffering and martyrdom is more of an simple way to heaven ticket, no different than what is used to get suicide bombers by blowing themselves up. Instead of having to trust Jesus and the Bible, having your head lobbed off is like a express ticket to heaven, that they say will guarantee you immediate admittance. Why? Because living by faith is actually a whole lot tougher and filled with uncertainty. I don't even remember how many days have I struggled with whether or not I'm saved. In the end, I have to take it back to the promises of Jesus and the Bible, both of which I believe are absolutely true. And both say that whomever seeks Him sincerely, He will in no way turn away. So in a way these Christians are opting for the easy way out. They rather have something physical to show they are saved rather than have the spiritual maturity to trust God and His promises of grace. Is it little wonder then why Jesus said:
This is not to say that one can necessarily loose their salvation. However the pursuit of such a worldly sign of salvation would cause me to question if they ever truly were saved. Because if one is saved by believing in Jesus, they would show the fruits of love, mercy, humility, and gracefulness instead.

Are all tribulations the same?

There would seem to be two tribulations Jesus mentions. But too many people like to lump them into one.
These passages describe a tribulation from the world or man for being a Christian. This tribulation we are told to expect. If we do experience it we are not to be surprised. It is can vary from verbal abuse to downright martyrdom. However there is another tribulation to come.
Notice that this is called by Jesus, Daniel, and John the 'great tribulation'? Jeremiah calls it a time of 'Jacob's trouble' mirroring Daniel saying it is only for his people, Israel.  This is the last prophetic week of Daniel, which is 7 yrs. So obviously this isn't meant for the Church to experience as even in Matthew 24, the Church was not yet in existence and Jesus was talking to Jews about their great tribulation period at the end of time, just before the 2nd coming of Jesus.

Conclusion of the Matter
We are all called to do different roles and different amounts of suffering. Just because one person is called to die for his faith in Christ, doesn't mean you necessarily might be. In a way it is like coveting something you can not have. And just because you were not called to suffer identically doesn't make you any more or less of a child of God. Likewise for that person, death for Christ doesn't make him more or less of a child of God than you are. Our citizenship in Heaven is not dependent upon merit we earn by suffering, martyrdom, or effort.
No true Christian should ever in their right mind be wishing suffering or trouble upon others much less fellow believers. I'm sure none of the martyred apostles or Christians would wish what they went thru on anyone else much less their brothers or sisters in Christ. I'm sure if they had a say they would rather all Christians never have to suffer persecution or death as they did, and rather wish them all nice quiet lives. Can the rest of us, living today, do any less for each other?
Back to Sheep Pastures
Powered by