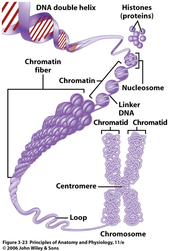 Fixed Chromosome Counts
There is no scientific evidence that a species can change the number of chromosomes within the DNA. The chromosome count within each species is fixed. This is the reason a male from one species cannot mate successfully with a female of another species.

Man could not evolve from a monkey. Each species is locked into its chromosome count that cannot change. If an animal developed an extra chromosome or lost a chromosome for any reason, they can not successfully mate. Perfect example of this is the mule(63), which is the sterile product of a donkey(62) and a horse(64). The defect could not be passed along to the next generation. Evolving a new species, for this reason alone, is scientifically impossible.

Built-in DNA Error Checks
The scientific fact that DNA replication includes a built-in error checking method and a DNA repair process proves the evolutionary theory is wrong. The fact is that any natural attempt by the DNA to change is stopped and reversed.﻿ If DNA is not allowed to make mistakes during replication, mutations can not occur. Without mutations, evolution is completely dead in the water.
Powered by