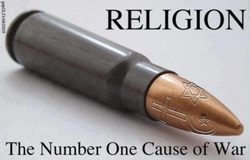 The Claim: “Religion has been the primary cause of war and oppression throughout the history of mankind.”

The Truth: In their comprehensive Encyclopedia of Wars, Phillips and Axelrod document the recorded history of warfare. Of the 1,763 wars presented, a mere 7% involved a religious cause. When Islam is subtracted from the equation, that number drops to 3.2%.

In terms of casualties, religious wars account for only 2% of all people killed by warfare. This pales in comparison to the number of people who have been killed by secular dictators in the 20th century alone.

http://www.nytimes.com/2003/07/06/books/chapters/0713-1st-hedges.html
Frankly, I could just leave the subjects with the facts as stated above, but I know there are plenty of people that would have other follow up questions. The simple fact that man is rebellious and sinful reflects the constant flaring of wars in history that have taken the lives of millions

Why are there wars?

For the most part all men and women are covetous by nature, meaning they want what they can't rightfully have. They can not rightfully have an item because it is currently owned and used by another. So the simpliest solution is to kill the current owner and take it for themselves. Whether they are coveting territory, items, raw materials, or even positions of favor, death is always the simpliest and final answer.

We also have the case when there are differing opinions for whatever the reasons. Again sinful man finds the final resolution with a weapons. When we apply this to nations we get large scale regional wars. Of course when the world is involved it becomes a world war. When the fighting is between two ethnic groups it is usually characterized as nationalist war where we most often hear of our ethnic cleansings. Lastly there is the fighting between two religious groups, known as religious wars.
Powered by