by J Wing
These days we have no shortage in the number of people who claim they are Christ.  In fact the above three are only the tip in the iceberg when it comes to this wave of false Christ.  Would it surprise you if Jesus himself said in the end times there would be such people claiming to be him.
With all these false prophets, how can one keep themselves from being deceived and following one them?  Notice that in verse 24 Jesus even says that they would be able to deceive the elect (true believers), if it were possible.  How come only those elect are immune to the convincing of the signs and wonders? I contend the elect are able to not be deceived because they are familiar and know the true Christ Jesus way to well.  It is they who compare the scriptural descriptions of Jesus with that of the ones claiming to be Jesus.

Today when we deposit cash into our banks, especially with the larger denominations, the teller does various quick checks to ensure that the bill is genuine.  Interestingly enough they aren’t told how to spot a fraudulent bill as there are way too many ways to have a fraudulent bill.  Instead they are given the genuine bill and told to study it in detail.  This way they know all the security features that are in a genuine bill that if missing tips them off to reject the bill.

Likewise we need to study in detail the genuine Christ and how he is to come the second time, in order to recognize a fake Christ.  Where do we find details of the genuine Christ?  In the Bible and no other source.  Christ came preaching from the Bible alone.  Therefore anyone that claims they have additional books to the Bible or  new revelations from God, or new visions from God, or a book held as an additional source of truth alongside or in place of the Bible (eg: Book of Mormon, Great Controversy, Watchtower, Septuagint) cannot be allowed.
Most of these people claiming to be Christ have not acted like Christ, in that they are using their claims to amass great wealth from their followings.  Jose Miranda is a multi-millionaire from people tripping over one another to donate property and money to him.  He has several large houses and even a helicopter.  Sun Moon is rich beyond belief, again from adherent’s donations.  The real Jesus didn’t have anything to His name.
But most importantly, I feel is we should find out how the Bible says he is to return the second time.  After all, the Bible told everything that would precede his first coming, so we could identify Him.  Interestingly enough his second coming is in both the Old and New Testament.
Currently this is a picture of the Eastern Gate rebuilt by Suleiman the Magnificent on the Temple Mount facing the Mount of Olives.  When Suleiman heard the prophecy he blocked up the gate and put a Muslim cemetery there to put something unholy in the way of the Jewish Messiah. Knowing that Jews could not walk over graves without becoming unclean. However, according to these verses an earthquake will completely change the topography of the area, raising the Temple Mount to become the highest location on Earth. 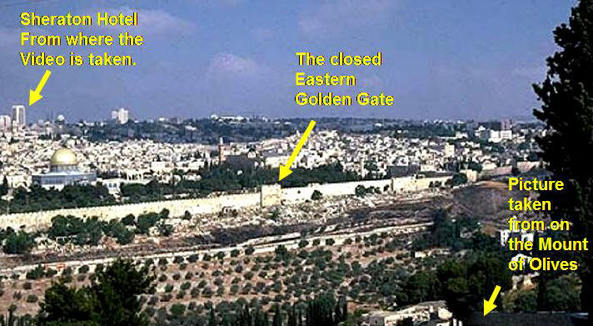 However you might ask what about Jesus coming for us in a Pre Tribulation Rapture?  Can’t that be as quiet as all these false Christ claim to be?  Let’s look at the verses describing the Rapture.
So Jesus, in coming back to Rapture us, isn’t even going to touch the earth.  He comes in the clouds and we are caught up to be with Him, in a moment.  The Greek word Paul uses is “atomos” which means ‘not cuttable’ or ‘not divisible’.  It is where we get our word ‘atom’ from.  Then in the clouds we are taken to heaven to the mansions he’s prepared for us, to be forever with Him. According to Jewish wedding custom which John 14:1-3 alludes to, Jesus will come back for His bride the Church before his 2nd coming

Also if you look carefully in both of these verses you’ll see another awesome power of Jesus, as He was God himself. You will notice that both verses mention that real Jesus can and will raise the dead. This is one power no one can duplicate. Even the AntiChrist, for all his powers from Satan, can only take life, but never give it, much less give it back to something already dead.  It is a power that is reserved only for God, as He is the only one that can bring LIFE. Here are a few examples in Jesus day.
As can see the REAL Jesus can not only bring Himself back to life after 3 days, but bring people back to life after being dead for centuries. His power over death is absolute and can not be challenged by anyone, not even angels.  Many people wonder how we can tell a Satan empowered fake Christ like the foretold AntiChrist from the geniune Jesus Christ?

Simply put if anyone claims to be Jesus and doesn’t meet all of these descriptions above, you know that they are a false Christ.  You do not need to fear them nor anything they say or do to you.  If I could only leave you with only one bit of information, it is this.  Recognize the real Jesus and pray to receive Him into your life and save you.  It’s a free gift and costs us nothing to accept. Just say this prayer:
Back to Shepherd's Call
Powered by