One of the most bizarre things Catholicism has in common with the large majority of religions of the world is ancestor veneration. In Asian culture it is called ancestor worship or honoring your ancestors and involves leaving food at a family shrine or grave. Africa have a reburial ceremony. But the most curious of all is their immense similarity to Ancient Egyptian funeral rites.

In Ancient Egypt the soul of the deceased weighed against the Feather of Ma'at  (signifying Truth) by the Lord of the dead, Osiris. Few whose hearts are truly evil, would outwieght the Feather and be thrown to the goddess Ammit  to consume.  Ammit is a composite creature of the three deadliest animals in Egypt: the crocodile, the hippopotamus, and the lion. Being fed to Ammit was to be consigned to cease from existence. The ka (soul) would then suffer a fate worse than death, that of being forgotten.

For this one reason  tombs would invite passers-by to speak the deceased names aloud, in hopes to perpetuate their memory, and to offer water, prayers, or anything else. In houses, niches were carved into walls for housing images of the dead family members and serving as altars of veneration. Royals, nobles, and the wealthy would make contracts with local priest to perform prayers and offering at their tombs. Many of these practices continue today in Kemetic Orthodoxy. (a)

These rites are virtually identical to prayers for the dead, patron saints of families, and mass cards given to Catholic priests for the deceased. Prayers to the dead only entered into the Church in 300 AD and has more in common with pagan practices of Egypt and China.

Faced with criticism many Catholics defend their veneration of saints claiming that they are not praying to the saints but rather "simply asking them to help us, by praying to God on our behalf, or thanking them for having already done so." They further argue:  "just as we might ask a friend or family member to pray for us, we can approach a saint with our prayers, too." They also defend their possession of statues to be equivalent to a person possession of a photograph of deceased family members.(b) So lets deal with each ascersion and compare to what their own Scripture says about the matter.

(a) http://en.wikipedia.org/wiki/Ancestor_worship#Ancient_Egypt
(b) http://catholicism.about.com/od/thesaints/f/Pray_to_Saints.htm
http://www.americancatholic.org/Newsletters/CU/ac1001.asp
Obviously there is a huge difference between asking someone living to pray for you and someone who is dead to pray for you. One can actually do it and the other well can't. But more importantly what does the Catholic Church's own Bible say about this practice of talking to the dead?
To drive the point home on just what God would do to people that do such a detestable thing as talking to the spirits of the dead, even if they are spirits of holy, godly people, we have 2 examples. 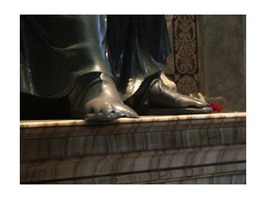 Possession of Statues are the same as possessing pictures of the person.

Catholic Catechism (part 3)
2132 The Christian veneration of images is not contrary to the first commandment which proscribes idols. Indeed, "the honor rendered to an image passes to its prototype," and "whoever venerates an image venerates the person portrayed in it."[70] The honor paid to sacred images is a "respectful veneration," not the adoration due to God alone:

Actually it is the same thing. But before you say 'see you agree with what I do.", let me finish. Possessing statues or pictures of a person is not inherently wrong but what you DO with them can be. A picture of anything is not wrong but if you bow to it and worship it as your god or as your communication to God, it is. Some Catholics have said that they are not bowing to the statue but rather the substance behind the statue. So in essence they are bowing to who the statue depicts, whether it be one of the saints or to Mary. This too is condemned by the Catholic Bible. Simply put ANY consultation or communion with the spirit of ANY deceased (good or bad person), as shown above in the Catholic Bible, is abhorrent and rejected by God. So how can the any Catholic believer justify talking to God through any dead person?

The only way to talk to God
God made it clear that if we want to truly talk to Him everyone MUST go through His son Christ Jesus only. Not Mary since she's dead. Not Peter, since he's dead. Not any of the apostles or prophets, since they are all dead. Jesus and Jesus alone is the only way to God. Jesus died an rose from the dead, so praying through Jesus is not necromancy.
Won't you accept this Jesus, as He is your only way to get to God and throw away your useless idols that Rev 9:20 says "which cannot see or hear or walk". Just come to God by praying this prayer through Jesus name alone: