Name of the God of the Bible
Muslims claim that Allah is the God of the Bible. Yet "Allah" does not appear once in either the Old or New Testaments. The only time God is referred to by name in the Old Testament is either as "I AM" YAHWEH (meaning "He (who) is") or as a contraction, YAH. [Please note that the name "Jehovah" is not a biblical name of God instead was especially 'created' by Jews afraid to pronounce the Sacred Name by combining the consonants YHWH with the vowels from adonai, meaning "Lord"].

The word allah does exist in Hebrew but it is not a proper name and it never refers to God of the Bible. Neither is the word 'alah' or 'allah' in the Greek New Testament at all. Therefore the claim that 'Allah' was the name of God in the Bible(God of Israel) is without one single shred of evidence. God of the Bible and Israel has always been known as Yahweh, or (much less frequently) by the contraction Yah.

﻿Origin of the Name Allah﻿
So if Allah isn't the name of the God of the Bible, just where did it come from? "Allah" comes from the compound Arabic word, al-ilah. Al is the definite article "the" and ilah is an Arabic word for "god", i.e. the god. We immediately see that (1) this is not a proper name but a generic name  like the Hebrew El (which was used of any deity; and (2) that Allah is not a foreign word (as it would have been if it had been borrowed from the Hebrew Bible) but a purely Arabic one. It would also be wrong to compare "Allah" with the Hebrew or Greek for God (El and Theos, respectively), because "Allah" is purely an Arabic term used exclusively in reference to an Arabic deity.

﻿Allah in Archeology﻿
Archaeologists have uncovered temples to the Moon-god throughout the Middle East. From the mountains of Turkey to the banks of the Nile, the most wide-spread religion of the ancient world was that of the worship of the Moon-god. In the first literate civilization, the Sumerians have left us thousands of clay tablets in which they described their religious beliefs. As demonstrated by Sjoberg and Hall, the ancient Sumerians worshipped a Moon-god who was called many different names. The most popular names were Nanna, Suen and Asimbabbar. His symbol was the crescent moon. Given the amount of artifacts concerning the worship of this Moon-god, it is clear that this was the dominant religion in Sumeria.

During the nineteenth century, Amaud, Halevy and Glaser went to Southern Arabia and dug up thousands of Sabean, Minaean, and Qatabanian inscriptions which were subsequently translated. During the 1950's, Wendell Phillips, W.F. Albright, Richard Bower and others excavated sites at Qataban, Timna, and Marib (the ancient capital of Sheba). Thousands of inscriptions on walls and rocks in Northern Arabia have also been collected. Reliefs and votive bowls used in worship of the "daughters of Allah" have also been discovered. The WIFE, al-Lat and the 2 daughters al-Uzza and Manat are sometimes depicted together with Allah the Moon-god represented by a crescent moon above them.

Muslims will find this hard to believe but the facts must be faced. Archeology has found Allah. Allah existed as the Arabian moon god long before Muhammad ever introduced him to Arabs.
Now these 3 daughter goddesses of Allah normally wouldn't mean anything, but interestingly enough they show up in the Qur'an's 'Satanic verses'. This ensures the identity of Allah as the pagan moon god of the Arabs whose symbol was the crescent moon. Islamic clerics in Mecca still insist on the canon of the Satanic Verses to this day. So here is the verses straight out of the Qur'an.

Muhammad COMMANDED his followers to worship 'the daughters of Allah in the Qur'an in Sura 53:19-20. Then Muhammad said he was mislead by satan. Muhammad couldn't tell the difference between revelations from Allah and revelations from satan. And this is whom muslims trust with their eternal salvation? No prophet of Yahweh in the Bible ever confused satan's voice with Yahweh's voice.

﻿Conclusion﻿
The pagan Arabs of old worshipped the Moon-god Allah by praying toward Mecca several times a day; making a pilgrimage to Mecca; running around the temple of the Moon-god called the Kabah; kissing the black stone; killing an animal in sacrifice to the Moon-god; throwing stones at the devil; fasting for the month which begins and ends with the crescent moon; giving alms to the poor, etc. All of which is identical to what Muslims today are required by Muhammad to do. 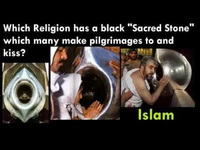 So who is Allah? Simply put he is only a repackaged moon god considered chief among 360 gods Arabs had all throughout history. Allah was married to the sun goddess and had 3 daughter goddesses, all 3 being repeated by name in the Qur'an. Far from the all knowing, omnipotent God of creation and the universe that is in the Bible, Allah turns out to be no more than a statue of a moon god of bygone Arabian countries who have come and gone. Instead the God of the Bible is the God of Israel whose country and people have been preserved by Him, against constant and best attempts to wipe them out. This very real God of Israel, Yahweh, made a promise recorded in the pages of the Bible to Israel that they would remain a nation and people ever before Him until the sun and moon stopped shining.

This same God also makes a promise that if we come to Him and accept His son Christ Jesus, called Yahshua, we would be saved and enjoy true Heaven with Him. This Heaven is not the sick twisted dream of Muhammad with rivers of wine and 72 virgins(of either gender that suits your fancy). Rather this Heaven is a perfect place with no disease, no sickness, no violence and no injustice. Sound too good to be true? It gets even better. Yahweh doesn't tie you up in rituals and prayers with the threat of rearranging your face if you don't get it right. Instead He values a relationship of love and constant communication at anytime, anywhere, and any way. And best of all, this is all a free gift from Him. You don't need to do anything to earn it, in fact you can't. All you need to do is accept the gift He gives by believing in His son Jesus who died in your place to pay for all your sins. Won't you accept his free gift today?
Ref:  http://www.biblebelievers.org.au/islam.htmhttp://www.biblebelievers.org.au/moongod.htm
Powered by